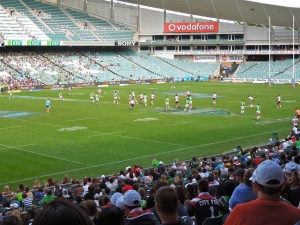 I went to my first rugby game on Sunday, a hard-fought match between the Canberra Raiders and the hometown Sydney Roosters. The Raiders had an early 8-0 lead, but the Roosters played a great second half and won 14-8.

Rugby is a violent game – there are no pads and very few stoppages in play. In some ways, it’s similar to American football (the dimensions of the field, the way you can score), but in other ways it is totally different. I picked up on some of the rules, but I still don’t understand many of the game’s nuances.

It was one of the more unique sports experiences I’ve had, mostly because there were times when I had absolutely no idea what was going on. I followed the crowd of about 10,000 – I cheered when they cheered and booed when they booed. I’m so familiar with American sports that I never think about the rules. Everything is second nature when I watch baseball or football or basketball. This was completely different.

But, hey, I can proudly say that I am now a Roosters fan.