One of my favorite movies. It’s about nothing, really – just a bunch of friends who hang out at a diner after high school. It’s not all that different from me and my friends.

No movie from the 1980s has proved more influential. Diner has had far more impact on pop culture than the stylistic masterpiece Bladerunner, the indie darling Sex, Lies, and Videotape, or the academic favorites Raging Bull and Blue Velvet. Leave aside the fact that Diner served as the launching pad for the astonishingly durable careers of Barkin, Paul Reiser, Steve Guttenberg, Daniel Stern, and Timothy Daly, plus Rourke and Bacon—not to mention Levinson, whose résumé includes Rain Man, Bugsy, and Al Pacino’s recent career reviver, You Don’t Know Jack. Diner’s groundbreaking evocation of male friendship changed the way men interact, not just in comedies and buddy movies, but in fictional Mob settings, in fictional police and fire stations, in commercials, on the radio. In 2009, The New Yorker’s TV critic Nancy Franklin, speaking about the TNT series Men of a Certain Age, observed that “Levinson should get royalties any time two or more men sit together in a coffee shop.” She got it only half right. They have to talk too.

What Franklin really meant is that, more than any other production, Diner invented … nothing. Or, to put it in quotes: Levinson invented the concept of “nothing” that was popularized eight years later with the premiere of Seinfeld. In Diner (as well as in Tin Men, his 1987 movie about older diner mavens), Levinson took the stuff that usually fills time between the car chase, the fiery kiss, the dramatic reveal—the seemingly meaningless banter (“Who do you make out to, Sinatra or Mathis?”) tossed about by men over drinks, behind the wheel, in front of a cooling plate of French fries—and made it central. 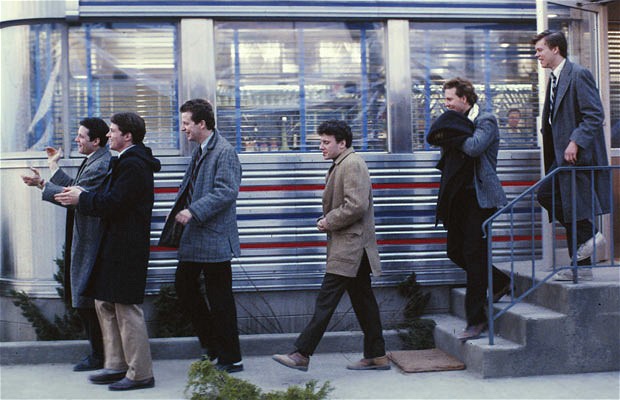