When I started college, a lot of people commented that I watch baseball differently than most fans. I am, I think, a naturally optimistic fan, and so I always think that the Yankees will find a way to come back. Sure, there are times where I feel discouraged, or doubtful, or frustrated, but I’ve seen too many thrilling come-from-behind victories to ever count the Yankees out.

I had a similar feeling on the night of May 24th, 2011. This was a game I saw at the Stadium right after I finished up my sophomore year. The Yankees trailed by one going into the bottom of the ninth. The Stadium had that special vibe where fans were anxiously awaiting a thrilling comeback victory. It wasn’t that we were hoping for one – we were expecting one. We were waiting to see who was going to be the hero that night.

As a Yankee fan, how can you not be optimistic? How can you not expect some amazing, awesome moments throughout the year? We are incredibly spoiled, and I try not to take that for granted.

As it turned out, Curtis Granderson hit a game-tying single with two outs, and then Mark Teixeira hit a walk-off single. New York, New York blasted from the speakers, and we all went home happy.

Joe Posnanski was there that night and wrote about it better than I ever could:

Those fans seemed to know when the ninth inning started Tuesday evening that the Yankees were going to win. They seemed to know this in a different way from, say, the hope that floods Fenway Park or Dodger Stadium or Busch Stadium in the ninth inning. Obviously this is only my perception. But it didn’t feel like “hope.” That word suggests doubt or at least hesitation. There is humbleness in hope. Yankee fans — proudly, I think — shun humbleness. Toronto led New York 4-3 going into the bottom of the ninth inning, and Brett Gardner grounded out to start the inning, and still the vibe I was picking up in the stadium was not IF the Yankees would win but HOW the Yankees would win, like this was an episode of “Perry Mason,” and they were as curious as anyone else to see who in the crowd would jump up and admit to being the killer. 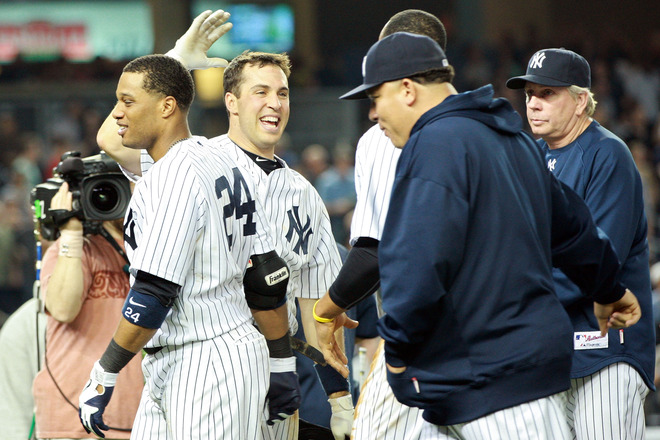