I was in Los Angeles last week and caught a Dodgers game. I went to a game there back in 2001. I remember that was the first time I ever kept score at a baseball game. Eric Gagne started. Sammy Sosa hit a home run. Things were different.

They don’t check your ticket like most stadiums, so you can basically sit anywhere. I moved down behind the first base dugout and took this picture.

While in LA, I visited one of the best animal shelters in the country. Is there a better sign than this? 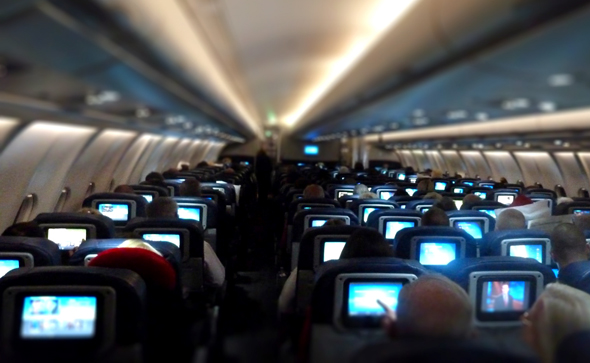 Now I can access the internet and watch cable television from 30,000 feet in the air. That’s nuts.

—
I like to arrive at airports early. Really early. It keeps the blood pressure down. This post on Medium sums up my thoughts:

Authorities recommend arriving two hours before international flights. I say four. Get there four hours before your flight. You are a hundred and fifty years old. Your friends laugh at you. Have patience.

Arrive early and move through the airport like the Dalai Lama. You are in no rush. All obstacles are taken in stride, patiently, with a smile. Approach the nearly empty check-in counter. Walk up and say, I’m a bit early but I’m here to check in to … Marvel at their surprise and then their generosity. Suddenly you are always able to get an exit row or bulkhead seat. Suddenly, sure, they can slip you into Business. Suddenly tickets that are supposedly unchangeable, cannot be modified, are, after a few calls, some frowns, upbeat goodbyes, specially modifiable for you. This is what happens when there is no one behind you in line to check in.

You are hacking the airport by arriving early, knowing that all the work you could have done at home — the emails or writing or photo editing — can be done at the airport.

Boston Calling was last weekend, the bi-annual music festival that started a few years ago. I went. It was a solid lineup – Bleachers, The Hold Steady, Girl Talk, Volcano Choir, Lorde, Childish Gambino. After The Hold Steady performed, the sky got very dark and then we were told to leave.

IMPORTANT ANNOUNCEMENT: Possibility of lightening coming in 15 min, please find shelter outside the venue. Everyone will re-enter once…

A few minutes later, the skies opened up and there was thunder and lightning and … it was all pretty cool. Three hours later, the show resumed.

Lorde will begin performing at 9pm. Please move calmly back through the gates so that we can get everyone in as soon as possible.

We went back. They had to cut Girl Talk and Volcano Choir, but Lorde and Childish Gambino closed the show late into the night.

I took this picture of Lorde:

Speaking of concerts, I finally saw Arcade Fire in August. They were awesome and very high on the list of bands I had wanted to see. Here is my updated list of top 5 bands/artists I want to see live.

A Led Zeppelin reunion trumps all of those.

—
I returned to the BC campus for the first time in a year. I walked onto the football field and lied down for a bit.

Hey, the ozone layer is coming back!

—
Offense has all but disappeared in major league baseball. I made some charts to show this. These charts go back to 1973, when the DH was first instituted: 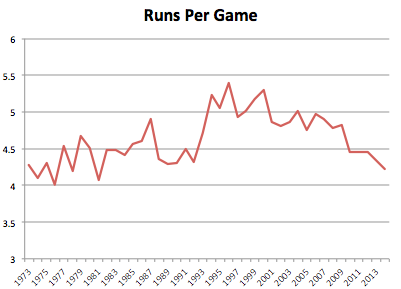 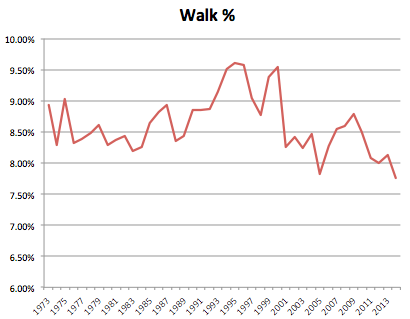 I took this picture during a Yankee broadcast:

I will be hiking Mt. Washington next week. More on that later.