I recently watched the vlogbrothers videos that explained the tax policies of Clinton/Sanders and Trump/Cruz. They were really well made and informative and relatable and I wish the regular media would do stuff like this.

Tax policy is, of course, not everyone’s cup of tea, but presented the right way it can be somewhat interesting. So let’s spend today looking at the tax policies of the four remaining Presidential candidates.*

*I meant to post this before Ted Cruz dropped out.

OK, so to start: in 2015, the United States government spent $3.8 trillion dollars, divided up like so: 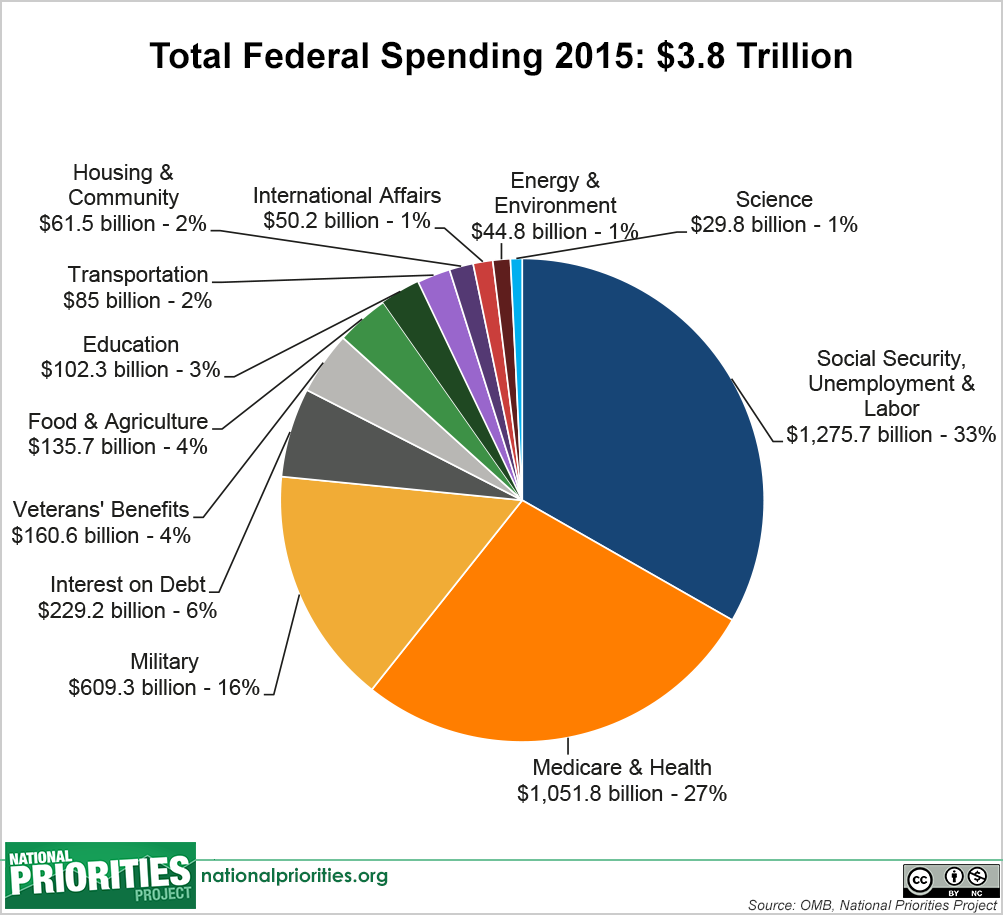 Now that you have that baseline, let’s look at everyone’s tax policies:

Cruz’s tax policy dramatically simplifies the American tax code, to the point where he would abolish the IRS.

Currently, we have seven tax brackets. If you filed as a single taxpayer in 2015, you paid:

This is, of course, minus any deductions – interest on a mortgage, charity donations, student loan interest, child care costs, or just the standard federal deduction (which anyone can take – in 2015, it was $6,300).

Cruz wants to a flat tax of 10%, with a $10,000 standard deduction. Let’s look at how that would effect millionaires:

They, too, would pay a lot less in taxes. What about someone making the median US average of $52,000:

So everyone would pay less in taxes, but the wealthiest Americans would by far receive the biggest cuts.

Cruz would also eliminate many tax deductions except for mortgage interest and charitable donations. He would also eliminate all federal gift and estate taxes, and repeal all corporate and payroll taxes in favor of a 16% VAT (value added tax). This would be a tax on business revenues, minus their capital investments and the money they pay to other companies.

The problem with Cruz’s tax plan is that it would dramatically reduce the amount of federal revenue, by approximately $8.6 trillion over the next ten years. Cruz says that by eliminating the IRS and some other government programs, they can save maybe $500 billion over the next decade, but that’s still $8.1 trillion short. Even if you cease all military spending*, you’re still be $2 trillion short.

Some economists argue that the shortfall would be partially offset by increased economic growth, but even the most optimistic models show a dramatic increase in the federal deficit, unless we also cut Medicare or Social Security. So, yeah, Cruz’s tax policy would be awful for a lot of people. And I’m not saying that because I’m a liberal hippy from New York. I’m saying that because MATH.

Trump wants to increase the standard deduction by more than Cruz – $25,000 for single filers and $50,000 for married couples filing jointly. He would then collapse the seven tax brackets into four, with the top rate being 25% on income over $432,000 per year. Trump would also eliminate federal gift and estate taxes and most deductions. But he would cut corporate tax rates instead of replacing them with a VAT.

Trump’s tax plan actually costs the federal government more than Cruz’s plan, which I didn’t think was possible. It’ll cost the government between $10 and $12 trillion over the next decade. Trump argues that his tax plan will be revenue neutral, but even the right-leaning Center for Federal Tax Policy wrote an op ed that was titled:

Trump could dissolve the military, and he’d still need to find $6 trillion to cut in order to make his policy revenue neutral.

I’d like to sit down with Trump (or Cruz) for an hour and go through some of the math in Microsoft Excel. I’d run some calculations and conclude by saying:  Look at the math, ya dingus. At that point, I imagine they would drop out of the race in shame.

Clinton’s tax plan is simple: KEEP EVERYTHING THE SAME.

There is one slight exception: she wants to add a higher tax rate (43.6%) for any individual that makes over $5 million.

Under Sanders’s tax plan, everyone pays an additional 2.2% tax, which goes towards paying for a single-payer healthcare system. He also adds some additional brackets:

Sanders’s tax plan is considerably higher. Also – one thing he does that neither Cruz, Trump, nor Clinton do is increase the payroll tax by 6.2% to further fund his single payer healthcare system and two years of free education (the payroll tax normally includes stuff like Social Security (12.6%, 6.2% of which is paid by you and the other half paid by your employer) and Medicare (2.9% below $250,000, 3.8% above), which is automatically deducted from each paycheck).

Sanders would also add his 2.2% tax increase to capital gains, and he would tax all capital gains above $250,000 as normal income.

Of course, Sanders’s increased taxes are partially offset by lower healthcare premiums. So the idea is that while your taxes go up, the average person would pay less money per year in healthcare costs.

In summary, Cruz and Trump want to significantly lower taxes, which will make your paycheck bigger but will leave the federal government vastly under-funded. Clinton wants to continue the same tax policies as Obama. Sanders wants to add new taxes, especially for those with high incomes, that will pay for a single payer healthcare system and free education. Got it? Good. Tax policy is exciting.